There’s no doubt that email marketing can be an extremely effective tool to drive conversions; a survey from Econsultancy found that three quarters of companies agree it offers ‘excellent’ to ‘good’ ROI. However, it’s important to note that, perhaps unsurprisingly, metrics such as open rate can vary a lot depending on the specific industry you’re in.

In order to set realistic goals for your email marketing campaigns, it’s a good idea to know the average benchmarks for open rates in your niche, and then compare them with your own results. Shockingly, 15% of marketers still don’t review their email opens and clicks, according to research from MarketingProfs, so it’s probably safe to assume that many companies also aren’t aware of the averages for their industry.

In this article we’ll take a look at how the figures vary from industry to industry, and what you can do to ensure your email campaigns are always as successful as possible.

While there have been numerous surveys conducted to find the average open rate across all industries, the results can be varied. However, the general rule of thumb seems to be that a figure of around one quarter is the average benchmark. For example, research from Sign-up To delivered an average open rate for UK SMEs at 24.79%, whilst GetResponse puts it at 22% for all marketing campaigns.

Despite the average open rate being cited as around a quarter, in reality the majority of industries will find their results being less, sometimes by quite a far margin. A December 2017 study by Constant Contact of over 200 million emails sent from their platform concluded that the most often opened emails are those sent by religious organisations (25.62%), followed by civic and social membership clubs. This is probably not surprising given that the recipients of these messages are likely to already have a vested interest in the sender, for example as a member of a church or gentlemen’s club.

In contrast, the worst-performing industries for open rates are marketing, advertising and public relations (10.36%), and online retail (11.51%). Interestingly, the open rate doesn’t have too much bearing on the bounce rate; despite having one of the lowest open rates, online retail has one of the more impressive bounce rates of just 6.76%. This emphasises the importance of things like subject line content, but more on that later!

The table below details the findings from Constant Contact’s research. How does your industry measure up? 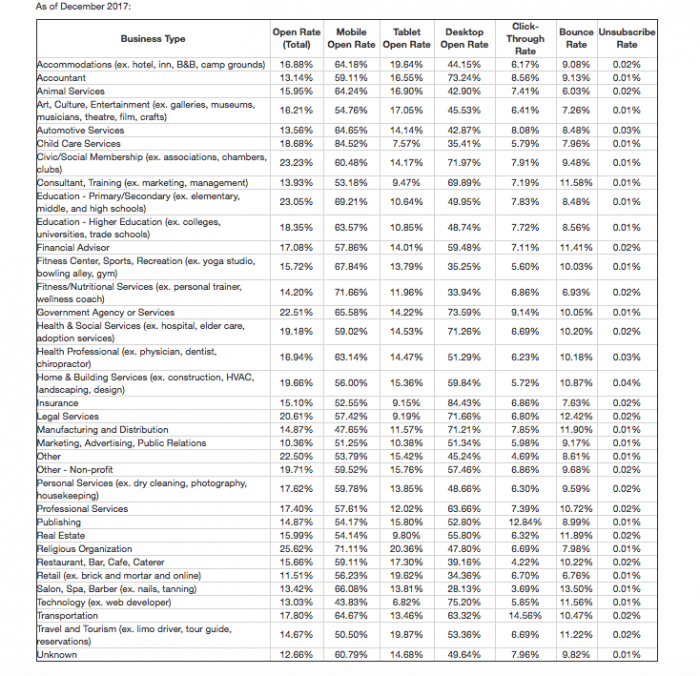 As the table clearly demonstrates, the metrics like open rate vary greatly across all industries. The device used can also have a big effect on open rate; desktop opens for insurance emails was over 84%, compared to just 28% from salon, spa and barber businesses.

Opens via tablet remained comparatively low across all industries. One of the highest rates was in the accommodation sector (19.64%), perhaps due to these devices being used more for necessities and when on the go. One important thing to note is the high open rates for mobile; in the majority of cases these were higher than their desktop counterparts. This demonstrates the need for marketers to ensure their messages are carefully optimised for mobile devices.

The highest bounce rates overall went to salon, spa and barber businesses (13.50%), and legal services (12.42%), perhaps signifying a high number of outdated email addresses, in which case a reputable contact directory is a good idea.

How to Improve Your Email Open Rates

According to research from Ascend2, 54% of marketers say that increasing the engagement rate is their number one priority for email marketing. If you find that your open rates are relatively low compared to your industry average, it’s definitely a good idea to make sure you’re using best practices in your campaigns. These include:

Getting Through to the Right People

One of the best ways to greatly increase the chances of your emails getting opened is to ensure that you’re sending them to the right people. When it comes to targeting other companies, it’s little use sending messages to generic email addresses as they’ll just end up getting lost in the pile or blocked by gatekeepers.

This is where a reliable business contacts provider such as Global Database comes in. Using the Global Database directory means you have access to direct phone and email details for employees, saving you time and money in the long-term. You can also easily filter prospects based on things like industry company revenue, and seniority level, to build highly-targeted email lists of CEOs and other decision makers. The data is regularly updated and humanly verified, resulting in one of the highest accuracy ratings on the market.

With email open rates varying so much depending on industry, it’s important to have an idea of the average in your sector in order to set realistic campaign goals. Underperforming messages can usually be tweaked using best practices, and in the majority of cases getting hold of direct contact details is likely to offer the greatest chance of conversions.

To learn more about Global Database’s global B2B directory visit them at www.GlobalDatabase.com.

The post Are You Getting Through? Email Open Rates by Industry appeared first on Home Business Magazine.