Bitcoin is certainly one of the hottest talking points of 2017. By now, you’ve probably heard of folk making millions on what some commentators are calling the hottest investment of our generation. You’ve probably had a brief glance at the chart and based on the insane growth the digital asset has already experienced, you think you’ve missed the boat. In truth, you probably have missed the opportunity to become a millionaire from just a $100 investment. However, that doesn’t mean there aren’t other ways to do well financially out of Bitcoin. 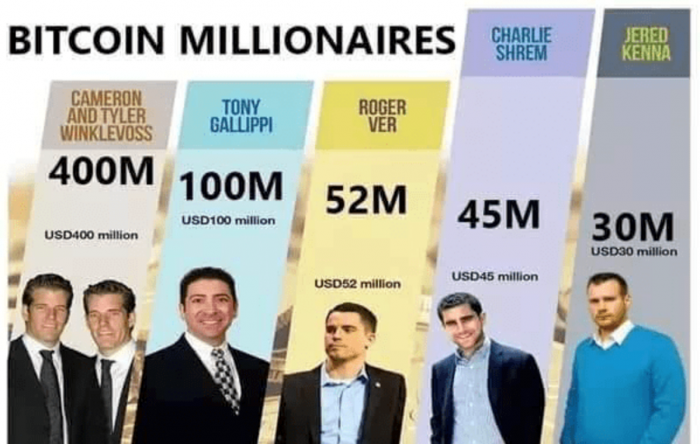 Is it too late to join the elite?

Many high-profile commentators believe that the prices we’re seeing for Bitcoin today are naught but a fraction of what each unit of currency will be worth by even 2020. John McAfee is particularly bullish for the long-term price of Bitcoin. He’s so confident in fact that he put what many consider the ultimate stake on the line via Twitter. Replying to a user who asked “so 1btc 500k within 3years”, the ever-eccentric software developer boldly stated, “if not, I will eat my dick on national television”.

He’s not alone in his meteoric price predictions either. Broadcaster and host of the RT News show “Keiser Report”, Max Keiser, has similar sentiment. Whilst not quite as brazen as McAfee, he did use his substantial platform to publicly announce his expectations of a $100,000 “and beyond” Bitcoin.

These figures might seem like they’ve been pulled from thin air, but investors look towards the fixed supply of the currency, and the ever-growing interest in it as a medium as international transaction, as well as the pathway to a taking back monetary control from large banking institutions, as signs that we’re at a very early stage in the cryptocurrency story. Indeed, those who believe in the protocol see Bitcoin as a kind of digital gold. One of the major differences currently is the market cap of the two assets. Bitcoin’s market cap’s all time high mark was just over $100 billion. Meanwhile, if we presume a price of $1,290 per ounce of gold, it has an implied market cap of $7.07 trillion. Historically, gold has been the planet’s most secure store of value. If Bitcoin were to usurp this use case, there’s a hell of a lot of upside potential for the digital asset.

The great thing about investing in the cryptocurrency space how easy

If you’re a lot less risk averse and a bit more impatient you could always give trading a go. Thanks to the current volatility in cryptocurrency markets, there’s a lot of profit to be made. Using an exchange platform such as Bittrex, Coinbase, or Bitfinex, those with the cahones for it might be able to turn a quick buck. It’s incredibly easy to get started. Just register an account at your chosen exchange and load an account with funds. Then simply buy into one of the many cryptocurrencies available and trade it for others as and when analysis shows a profitable trade. Each coin or token has a unique team, goal, and development timeline. This makes each move independently and positive news for one project might make its value skyrocket overnight. Savvy market analysts can make informed choices when to move from one asset to another and take advantage of these daily swings in prices. Be warned, however. A bad trade can decimate profits and even eat into the initial stake put into trading. It’s not for the faint of heart but skilled traders can certainly make it work.

There are also various courses that one can take to develop the skills needed to read charts, analyse market trends, and spot bullish and bearish signals. Even with these aids, the life of a cryptocurrency trader isn’t for everyone. The markets are open 24/7 and the space moves so quickly that just a few short hours can see dramatic shifts in an asset’s price. Grabbing just a moment’s sleep could well cost you dearly.

Get Paid in Bitcoin

Another way to make money off Bitcoin is to just get paid in it. It does have many properties of a currency after all. It’s incredibly easy to get cross border payments and the fees are lower than with services like Paypal. There’s also no requirement to have a bank account meaning potentially greater participation from the billions of global citizens who don’t have access to banking services.

Crypto advocate Andreas Antonopoulos takes payments in Bitcoin. Being as he speaks at events all over the world, it’s easier for him that his clients use a single currency. To try and encourage BTC use, he even offers a massive 20% reduction on the fiat price of his services.

Obviously, if you’re grinding the nine-to-five, it will be a good few years before your boss suggests paying you in cryptocurrency. However, for freelancers in various tech-roles it’s ideal. The writer of this piece has on occasion taken payment using the digital currency.

There are even websites springing up that provide a marketplace for employees to hire freelancers on that insist on using cryptocurrency. Examples like Rein ease the inevitable trust issue that arises when taking on a job offered from an unknown person who’s based in a different country to you. They use multi-signature escrow and a trusted mediator to ensure that payment is delivered to the freelancer upon meeting the terms of the contract set out to begin with.

Another way to earn some Bitcoin would be through a Bitcoin casino. Now, we’re not recommending you wildly gamble your pension away on the slots. It’s fine if it’s for enjoyment but it’s hardly a guaranteed money-maker. However, if you’re handy at the poker tables, profit can be made by exploiting your opponent’s weaknesses.

Online Bitcoin casinos require few overheads and there are no hefty Visa bills to pay. This often translates into games with a lower rake per pot. So, if you’re beating the game, you’ll be beating it by a little more just by choosing a Bitcoin casino.

In addition, Bitcoin casinos allow players from all over the world. They rarely (if ever) have barriers to entry based on the country you’re playing in. Players living in jurisdictions in which online poker is illegal could use cryptocurrency to circumvent the regulations in place in their country. Depositing and withdrawing can be done in minutes without waiting for credit and debit card processing times or relying on a bank account to receive the money.

If you’re more entrepreneurial, you could have a go at setting up your own Bitcoin casino. As mentioned, the cost to run is very low and creating a brand within the space early could be a huge advantage. There are more Bitcoin casinos popping up daily, so you might have missed the boat in terms of earliest adoption, but the space is far from saturated, and there certainly isn’t a “big name” yet.

Finally, just like other online gambling services, Bitcoin casinos will frequently offer affiliate deals. One example of such is NoDepositFriend. Publishers of content on iGaming, cryptocurrencies, or – better still – both, can receive payments for every successful registration and deposit made at a crypto casino. By promoting the services of the casino and providing the relevant links for their affiliate deal, they’ll be able to earn directly based on their recommendee’s spending habits. Many thousands of affiliates already exist in the fiat-currency gambling industry, however, crypto’s affiliate market is much less saturated. This could be a great opportunity to monetise your content creation.

The post The Novice’s Guide to How People Are Making Money from Bitcoin appeared first on Home Business Magazine.